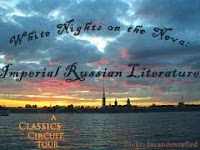 Welcome to today's stop on the Classics Circuit Imperial Russian Literature tour, where I'll be reviewingAnna Karenina. Make sure to check out all of the other stops on the tour as well. I want to apologize for getting this post up late today instead of this morning. I'm trying to adjust to my new job and I haven't quite adjusted my schedule right yet. I also want to apologize for this being part 1 of a review instead of a whole review. I am only halfway through with Anna Karenina. I totally overestimated what I could get done in my time between jobs and trying to deal with all the things associated with a job change. I really just should have started it earlier though. But, it's such a big, dense book that doing two posts is probably a good idea anyway.

Despite my slowness in reading it, I'm loving Anna Karenina. And it's actually not as difficult a read as I expected. It's an interesting story with great characters. It really is a dense book though - lots of stuff going on, pages overflowing with characters, an abundance of details. And it's all meaningful. It's not a book you can read while mentally checking out. You really have to concentrate, which is something I've been lacking lately!

So, why is it worth the read? What they say is true - the Russians truly are the masters of the novel. In Anna Karenina, there are so many characters with overlapping stories that serve as a foil or foreshadowing of other characters and relationships. What surprised me so far is that despite the title and what I've heard back the book, Levin is the character I focus on the most and who seems the most alive. I'm a little bit in love with him actually. He's got his faults and certainly isn't some sort of Prince Charming/Mr. Perfect, but he's intelligent, rational, intense, insightful, and wise. I look forward to getting back to him each time the narration goes elsewhere. I'm rooting for him to live happily ever after. Hopefully his ending is a foil to Anna's!

I've also been surprised at how much I empathize with Anna. Going in, I knew she would cheat on her husband, and I expected to dislike her. I also expected that to happen much later in the book, but it happens right up front. Which makes it more interesting that I'm able to empathize with her. Tolstoy somehow makes you grasp the essence of his characters right from the start. With Anna, you instantly know she's not a bad person. You know her home life isn't happy, that she didn't chose to marry Karenin. That she deserves happiness and isn't going to get it. There is so much foreshadowing through the novel, which is another reason why the book is so dense. Every word could have an impact on later events, every action leads to reactions that resonate through the rest of the novel.

It's hard to describe the way Tolstoy crafts his novels. I feel like when I try to explain why I like them I can't come close to conveying what I mean. Clearly I'm not the wordsmith Tolstoy is. I know his books are intimidating, but I really do recommend giving them a try. Check out the Classics Circuit for other Imperial Russian writers and check back here for part two, hopefully soon!
Posted by Lindsey Sparks at 8:20 PM