And Now for the Rest of the Story 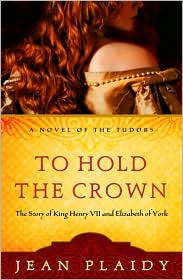 Well it's not really the rest of the story, it's the other side of the story. I read To Hold the Crown by Jean Plaidy, which tells the story of Henry VII and Elizabeth of York. In this fictional account, Henry is responsible for the death of the two princes. It even has him blackmailing the murderer into confessing, but making him change his story to say that Richard put him up to it and change the date to an earlier one while Richard still reigned. It was interesting that she did that because she basically counter-argued several of Weir's points in doing so and gave another account of what could have happened.

It was also just an interesting story, outside of the two princes elements. I learned that even queens have mother-in-law problems and don't get to do what they want. Actually queens probably have less freedom than us common folk and have to deal with an overabundance of politics and zero privacy. Most of the characters in this story just weren't very likable though. King Henry VII was an unemotional, uncaring robot. His mother was overpowering. His wife just did whatever Henry or Margaret (his mother) says, not thinking at all on her own. Elizabeth Woodville, the former queen and mother of Henry's wife Elizabeth (more creative naming), was oddly enough the most likable character, even though she plotted to bring down Henry, which would have resulting in bringing down her own daughter. You felt sorry for her though, because she went from being queen to Edward VI to basically being imprisoned and having her children declared bastards and her two sons most likely murdered (the two princes).

Despite all of that, I did enjoy the book, although if I hadn't read some of Plaidy's other works I'm not sure if I would have, or on the other hand maybe it would have been better because I wouldn't have expected as much. It didn't live up to Catherine of Aragon or Murder Most Royal. But then again Henry VII just can't live up to Henry VIII in history either, so I suppose that makes sense.
Posted by Lindsey Sparks at 6:28 PM