The Art of Mending 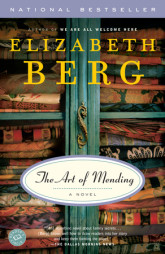 The Art of Mending by Elizabeth Berg is a book about family and if you can ever really know other person. It's about secrets in a family, that even siblings are unaware of. It's about how siblings can be raised in the same house, and have completed different perspectives on their upbringing. It's also about forgiveness, and moving past your past. While reading it, I actually didn't like it that much. I didn't like most of the characters, so it was hard to connect with them. But, when I finished everything, I did end up with a favorable opinion. I'm not sure how that happened. I think that by the end you better understand the characters, so looking back you like them a little more. I also liked some of the things it made me think about, and the fact that it made me think at all. It made me think about how I might describe my childhood differently from my brother. It might be think about memories that are seared into my mind, but that others who were there don't remember. For instance, I vividly remembering sitting on my grandparents' back porch eating McDonald's for breakfast one morning and my brother accidentally threw a butter packet at my Grandpa. It hit him in the forehead and opened a little, and stuck there. I clearly remember this moment. But, when my Grandpa passed away I shared this story with my family and no one else remembers it! I was shocked! I bet Pap (my Grandpa) would have remembered, but no one else did! Odd.

One of the other things I liked about the book is that it addressed some of the fundamental differences in men and women, something liberals are usually loathe to admit, and from some of the other books of Berg's that I've read about, I would have put her in that category. But she talks about how women are, obviously, biologically wired to have children. That makes women generally more nurturing than men, who naturally took on the hunting and gathering responsibilities since the women had to tend to the children. She addressed how this played into the differences in the siblings, with the brother checking out of the emotional aspects and trying to just fix things rather than comfort his sister. It also played into the main character's relationship with her husband, and some of the actions she takes. It wasn't a huge part of the novel, but it was so surprising to read something modern that went that direction that it stuck out.

I've read that this isn't one of her best novels, even in her own opinion, so since I still liked it I think I'll try out a few of other books.
Posted by Lindsey Sparks at 6:53 PM