You Had Me At Good-bye 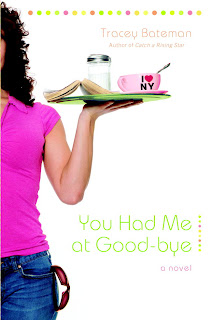 You Had Me at Good-bye is a follow up to Catch a Rising Star by Tracey Bateman. It was disappointing. In the first book, the main character lived with her two best friends. This book is about one of the friends. Who has a really stupid name. Dancy. What the hell kind of name is Dancy? It's awful. Change one letter and make it Darcy. Although Dancy is probably a good name for such a pansy character. Now, the main character in Catch a Rising Star was a bit of a wimp until the end. I shouted at her a few times, but I liked her so I forgave her. But having two characters with the same superwimp, I'm a doormat please just walk over mentality? No. It just got annoying. I didn't root for her. I wanted her to grow a backbone or just let someone run her over for good and be done with it. I think the author is trying to show that going to church and becoming a stronger Christian gives you more strength and more of a backbone, which is wonderful, but she did in a way where I had stopped caring long before that happened. I did think that was interesting though. You read a lot of stories, or really hear people say, that being a Christian means being weak, so it was nice to see the opposite, but this was not an effective way of doing it I'm sorry to say. I'm still going to power through the next one, about the third girl, but I already know I'm going to want to shake her by the time I'm done. She quit her lucrative job as an accountant to go back to school for interior design, which she's terrible at, not seeing that her perfect career is right in front of her with her love and ability to cook and bake and her friendship with a coffee-store owner who starts selling some of her goodies. I want to kick her and tell her to give up the interior design dream and go cook, but I'm going to read the book anyway because it's a series and I feel compelled to finish it.
Posted by Lindsey Sparks at 7:05 PM