The Politically Incorrect Guide to the Founding Fathers 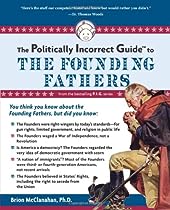 I really enjoy the Politically Incorrect Guide series. Unlike a lot of nonfiction books, they do a good job of breaking up the copy with section headers and sidebars. Most nonfiction books have really long chapters with no sort of breaks, and while that doesn't bug me in fiction, I can usually only read a little nonfiction at a time.
The PIG Guide to the Founding Fathers is, obviously, about about the founding fathers. Since little about most of the founding fathers is actually taught in schools these days, most people don't really know that much about even the biggest of them, and no nothing about many of the less prominent founders. This book starts with a good foundation of the myths currently told about the founders, the issues they focused on, and the revolution. Then it goes into mini-biographies of the "big 6" founders and 14 other founders.
Despite feeling like I knew a fairly decent amount of about the founders, I learned a lot, especially about the 14 other founders. I had never even heard of some of them, and yet they played large roles in the creation of my country. Some of them, like John Hancock, I had obviously heard of, but other than his famous signature I didn't know anything about him. Apparently he almost single-handedly financed the revolution. When Paul Revere made his midnight ride, he was going to warn Hancock and Patrick Henry specifically because the British were coming after them. The British believed that capturing just those two men would stop the revolution by removing their source of funding and their greatest orator. That's pretty impressive.
So historically, I highly recommend this book as a great foundation of the time. Another reason I like the PIG series is they recommend other books throughout the book, so now I have a great list of biographies of all of the founders and other books.
The other part I enjoyed about this book was that it focused heavily on the founders belief in states' rights and limited government. What so many people today don't realize is that our federal government was never supposed to be bigger or more important that the state government. Most of the founders wouldn't sign the Constitution without the Bill of Rights, most specifically the 10th amendment that guarantees the states' sovereignty in all things not listed in the Constitution, and that the federal government is limited to only the items listed in the Constitution. They would be appalled that the federal government controls the states now in almost everything. It would work so much better the way the founders wanted it to work. Then, if you had a state that wanted something like gay marriage, that state could make it legal. If a state didn't want it to be legal there, they wouldn't have to. And if a state, like Massachusetts, wants to provide healthcare to everyone, then they can. As long as they follow the laws of their state, then go right ahead. But the federal government has no right to force any state to participate in a healthcare program (or punish those who don't participate) or tell them they have to make gay marriage legal or illegal. That's why I'm a libertarian. Both parties have serious issues with this. Both of them have pushed various issues at the federal level when they shouldn't. Using the two examples I've mentioned, the Democrats are pushing federal healthcare right now, and Republicans have pushed for a national marriage amendment to outlaw gay marriage. Regardless of how I feel about either of those things, both are wrong at the federal level. At the state level it's different.
Sorry to get on a political tangent there, but I just get so frustrated with all of our politicians today, and it was both enjoyable and frustrating to read about a whole book of people I actually agree with. It made me feel like I was born in the wrong time period, except for the whole electricity and indoor plumbing and birth control thing!
Posted by Lindsey Sparks at 2:43 PM

Email ThisBlogThis!Share to TwitterShare to FacebookShare to Pinterest
Labels: Non-fiction