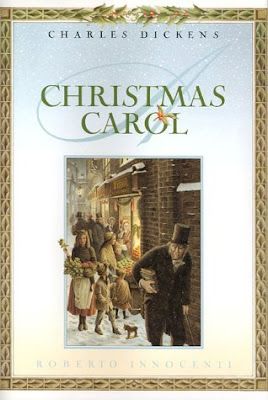 It's time for my annual rereading of Dickens' A Christmas Carol. One of the things that stood out to me this year was how he mentions other books such as Hamlet and Robinson Crusoe. It's fun to me that I've read some of the same stuff Dickens did, even though he lived a long time before me.
I'm jealous that people in Dickens' time actually got to hear him read A Christmas Carol. He'd do performances every Christmas. I knew this, but since I recently read The Last Dickens and watched a Doctor Who episode that featured him doing that, it just struck me that those people got to watch him do that. How cool would that have been? And it's amazing to me that 166 years later there's yet another movie made based on it. I wonder what it would have been like to read it that first year, before you knew anything about it. Now, we're usually very familiar with the story before we ever read it, if we ever read it. We all watch Mickey's A Christmas Carol and know the story from that. (I'm not knocking Mickey, I love that version!) But then when we read it, it's not as surprising as it must have been back then. I checked out a book from the library called The Man Who Invented Christmas, which is about Dickens, so I'm interested in what it has to say about that. Look for that review soon.
Also, I'm jealous that Dickens wrote this when he was just 31. That makes me feel like I really need to get on the ball with some sort of lasting accomplishment. I need to write a masterpiece in the next three years!
I usually try to post a picture of the copy of the exact book I have, but I couldn't find one for the one I have (not that I looked too hard though). It's from 1984 and is a signet classic, and they've updated covers since then and there are a billion different versions of the book out there, plus all movie stuff comes up even when you put "book" in your search. Oh well.
Posted by Lindsey Sparks at 4:02 PM