Whew! I guess after the readathon last weekend I decided to take a mini blogging break. I did read a few books last week, but then my husband and I took a long weekend trip up to Tulsa this weekend so I'm trying to play catch up now. The trip to Tulsa was fun. We stayed at a cute little boutique hotel, went shopping, went to a museum and to an aquarium, and had a lot of fun at Dave and Busters. Between that and the NHL playoffs starting though, other things have fallen by the wayside a bit. So I'm going to do a quick update on the books I read last week and call it good!

First up is Big Boned by Meg Cabot. I actually finished this during the readathon. I've written about Cabot's books before and don't really have anything new to say. I really enjoy them, and they always make me laugh. This one is a sequel to Size 12 Isn't Fat, which I read last year. It features former pop star Heather Wells, who currently works in a college dorm, solving a mystery. It's a fun, light-hearted read.

Next up is Club Dead by Charlaine Harris. I have enjoyed the Sookie Stackhouse books so far, but this one ended on a really sour note and I'm pretty sure I won't continue reading these. At the end of the book, Bill rapes Sookie after he's been tortured and is out of it and doesn't realize it's her. Now, I get that they're showing him as a vampire, a "real" vampire, not a "sparkly" one, but I expected to see Sookie having to see if she can get past it and try to deal with it. Instead, it's glossed over, and she breaks up with him because he was cheating on her, with no mention of the rape. She's never shown dealing with it in anyway. Now, maybe she does that in the next book, but it would be logical for her to at least reflect on it briefly in this one when she decides to call it quits with him. Perhaps I'm overreacting, but it just bothered me and I don't think I want to keep investing in reading these if I'm going to hold that against Sookie for the rest of the series.

The next book I read was We Have Always Lived in the Castle by Shirley Jackson. The only thing by Jackson that I had read before was The Lottery. I enjoyed the story of We Have Always Lived in the Castle, and I read it very quickly to find out what happened next, which is a good sign. But, I didn't really like something about the writing style. Maybe it's just that I'm not used to reading short books, but it seemed somewhat unfinished. Not the ending, but the writing throughout. For example, I was unclear on the main characters ages until fairly late in the book. And just the details overall seemed fuzzy, like Jackson wrote an outline and then just filled in sentences and left it at that. That kept bothering me, although like I said I still read it quickly and wanted to know what happened, so I still enjoyed it.

And finally, I read Love the One You're With by Emily Giffin. I was excited the main character was from Pittsburgh, where my favorite hockey team is from! And then much of the rest of it is set in NYC, where I'm going in a few weeks, and some is set in Atlanta, specifically in Buckhead, where I've gone for conferences before, so it was fun to idetify with all of the settings. I've loved all of Giffin's books, and this was no exception. It explores what happens when the one who got away comes back into your life a few months into your marriage. Giffin did a great job of showing that situation without making the main character seem stupid or evil. Ellen remains likeable throughout the book, and it's not a clear choice between the two guys either, making the anticipation over her decision that much better. And the description of life in Buckhead cracked me up. When I was there for a conference, there was a wedding shower at the hotel I staying at. I said a wedding shower, not a wedding mind you. All of the guests arrived in formals! I'm talking full-out tuxes for the guys, formal long evening gowns for the girls. In the middle of the afternoon. For a wedding shower. I hate to think about what the actual wedding was like! And there were at least 150 people there. It was completely insane. I've never even been to a wedding that formal, much less a shower! I kept reliving that over and over again as she described Buckhead society. Now, I like Atlanta, don't get me wrong, and clearly not everyone there lives in that manner, but that aspect is clearly there. I definitely recommend this book as a fun read! On a side note, I saw that Giffin's books Something Borrowed and Something Blue are being made into a movi starring Ginnifer Goodwin, Kate Hudson, Colin Egglesfield, and John Krasinski. I'm so excited! I like those actresses, and I loved Colin when he was on All My Children, and I'm excited he got a lead role in such a big movie! And he's definitely easy on the eyes and it would be easy to see how two women end up fighting over him. 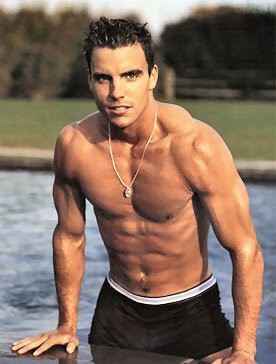